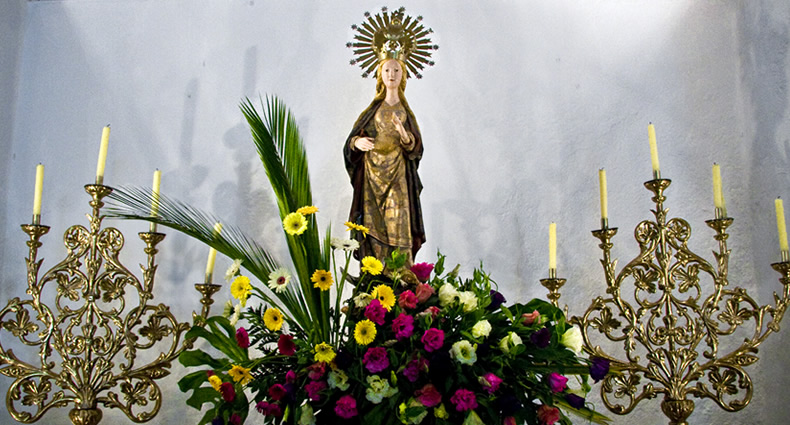 Festival of l’Esperança 2022 in Capdepera

When we say December in Capdepera, we are not just talking about Christmas.
The last month of the year is experienced in a very special way by the people of Capdepera, gabellins, because on the 18th they commemorate L’Esperança, the winter festivities coinciding with the winter solstice, a time when the sunlight begins to lengthen and the sown fields begin to sprout.

Capdepera venerates the Virgin thanks to the Legend of sa Boira, (The Mist), according to which a mysterious and providential mist was created to save the inhabitants of the castle from the attack of possible invaders.

The events begin on the eve of l’Esperança, on Saturday, with a popular walk from the castle (10 a.m.).
In the afternoon, the Virgin is carried in procession from the church of Sant Bartomeu to the castle (7 p.m.). Once there, the Completes, a mass torrada (grill) and a popular dance are held (7:30 p.m.).

On the 18th of December, the feast of L’Esperança, a religious service is held with the reading of the Sermon de la Boira (11:30). At the end, the image of the Virgin is carried once again from the castle to its place of origin, the church.

In recent years, Capdepera has revived a ritual in which the youngsters go through the village with torches made of bunches of reeds, singing the chant of Alei Alei.

In the evening, it is traditional to watch the sunset from the castle where the fire is lit (5.45 p.m.) as well as in the Plaza de l’Orient. And at 6 p.m. at both places the fires shows begin.

The Alei Alei is sung on the way to the Plaça Vella (the old square).
From there, both those coming from the castle and those coming from plaça de l’Orient, return together along Carrer Alt and the staircase of the Plan den Cosset to Plaça d’Orient, where an open street dance is held, accompanied by the songs of Aires Gabellins i Castell de Capdepera (7 p.m.).

In the past, the Alei Alei was held on Christmas Eve.
In 2018, coinciding with the fact that the Fallas of the Pyrenees were declared Intangible Heritage of Humanity by Unesco, it took place the revival of this tradition, which had ceased to be celebrated in Capdepera for several decades.

Select a category to see its location on the map.

The town offers many dive sites. We recommend you:

Do you need help?

You can request the information you need from here.